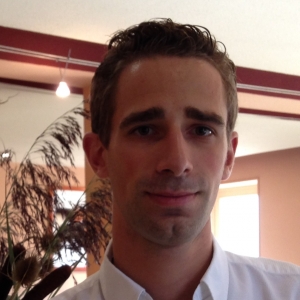 In an interview with DNA in the spring of 2014, a young Vatelien spoke about how he acquired the Le Pont d’Ognon Restaurant in Lure, in the French Haute-Saone department. This alumnus is Hugo Muller, a kid who never liked school and who, with his hard work, finally got his Postgraduate Degree from Vatel in 2013 and is full of ideas to make a success out of this restaurant he just bought.

“Even when I was little, I loved cooking with my grand-mother and I even asked for a dinette as a present! Then I wanted to do that for a living, so after I finished middle school, I went to a vocational cooking school, supported by my parents who understood that I didn’t like school and who had always encouraged me in my decisions.

After that I did a two-year vocational degree, mixing on the job training and school in a gourmet restaurant in Strasbourg and this was an eye-opener on what I wanted to do in the future.  Much to my family’s surprise, I applied to attend Vatel as I wanted to get training on how to run a hotel. As I already had my vocational degree, I just had to do the Foundation year and then I was directly admitted into the Postgraduate program. I really worked hard and after years of Management, Marketing, Human Resources and practical application work, I finally graduated! That just goes to prove that when you know what you want and give yourself the means to do it, you’ll succeed. I had always wanted to have my own restaurant, but Vatel taught me that just knowing how to cook isn’t enough. You have to know how to manage your restaurant, expand it and make it competitive.

Before I started, I did my final internship at the Ribeauville Casino, which, at that time, was expanding, growing from a casino-piano-bar into a four-star resort with 56 rooms, 3 bars, 2 restaurants, a balneotherapy center and a casino. A great place to put into practice all my knowledge and my hands-on skills that I had learned at Vatel.And then the Casino hired me after I graduated to set up an auditing department for the bar and restaurant in the resort, and after that I went to the commissary department on the hotel, restaurant and balneotherapy center parts. But I still never forgot everything I had dreamed about when I was little, and after having spent over a year at this resort, my future wife and I decided to take over a restaurant.

We decided to purchase the Pont de l’Ognon Restaurant, because it is quite was known in the region, but especially as it had a really good development potential on the catering and brasserie departments with semi-gourmet food. We “fell in love” with it, which is really important when you take something over, because that’s what lets you feel good, project yourself into the future and give it everything you’ve got.

So today, at the age of 26, I’m my own boss with ten employees and I apply the management tools I learned at Vatel each and every day. What I learned helps me get an overview of the decisions I have to make and weigh the pros and cons of them. Besides that, I’m much more aware of the legal framework you have to respect when you own your own company.

This year’s projects include settling down here, increasing the reputation of our restaurant and developing customer loyalty as well as bringing in a new client base. After that, we want our catering activity to start up again. We hope that the Pont de L’Ognon will become THE restaurant to go to in Lure, as well as in the surrounding area. Our goal is to have a one million euro turnover in five or six years, so we can start working on our next goal: A HOTEL!”