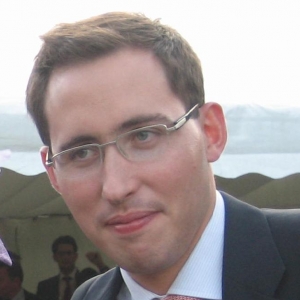 National B to B sales director

NEW JOBS FOR VATELIENS: In July 2014, Odran was appointed as Sales Manager of the French division of Bollinger Diffusion.

Odran Achard de Leluardiere has been the Key Account Manager of the Vranken Pommery Monopole Group that sells Wine, Champagne and Spirits, for over three years. He is also a Vatel in Paris alumnus from the class of 2004 and the father of three young children, Guilhem, Wandrille and Ines.

He’ll tell us a bit about what a Key Account Manager does.

What is your current position?

I joined the Vranken Pommery Monopole Group, whose headquarters are in Reims, in 2007, as the BtoB Key Accounts Sales Rep. At that time my missions consisted of leading PR operations, forming partnerships, events consumption, promotions and boosting sales. In two years my turnover reached €2,500,000.00 excluding taxes. That allowed me to be promoted in 2009 to the Key Account Manager position. My mission consists of negotiating master contracts and listing a portfolio of brands to retailers, hotel groups and restaurant and catering chains.

What did you do before attending Vatel and why Vatel?

I graduated from a technical high school specializing in the hotel and restaurant field, and then continued my vocational studies for two years in the same field. I chose Vatel on one hand because I wanted to broaden my field of vision: improve my knowledge and skills in taxation and management. And on the other hand, because of the School’s great reputation. Having Vatel on your resume really helps you land a job! In addition, a third element in my choice was the international outreach the School has. When you are a Vatel student, you have a network of Schools all over the world as well as a network of Vateliens.

What do you remember the most about when you attended Vatel? A story to tell?

Meeting exceptional people. The sponsor of our class especially, Mr. Francois Delahaye, who was the Operations Manager at Dorchester Collection. Or my professor of HR Strategies, Alain Raluy, who was the Human Capital Manager at Deloitte.

What have you done since you graduated? What opportunities have you had?

I did my final internship for Vatel at the four-star Hotel du Vin & Bistro located in Birmingham, England, where I stayed for ten months. I was then hired as the Hotel and Restaurant Sales Rep for Elis, the leading company in Europe for renting and cleaning professional clothing and linins. In 2006, Potel et Chabot recruited me as their Senior Project Manager.  They are a high end caterer and prestigious events management company. Two years later, I joined the Vranken Pommery Monopole Group.

A message from Alain Sebban on the re-opening of Vatel schools.

It is with great joy that we welcome our students back to Vatel schools. Of course, the virus is still around and so. we must all – cheerfully - respect the health measures put in place in our schools and training restaurants and hotels.

Our mission : preparing the younger generations for a successful career in International Hotel and Tourism Management

The hospitality and tourism industry puts people in touch with an ever-increasing and constantly changing world, making it the only one of its kind.

Hospitality: the field with a thousand facets

Serving others is a priceless quality in the hospitality industry, but not just there. Students with a degree in hotel management are attractive to employers: their qualities make them champions in all types of professions.

The 26th Eurhodip conference took place in Istanbul from October 16 though 20th, with the theme “Together, let’s build bridges.” Roughly a hundred participants from 25 countries and 35 schools attended this event.

With schools throughout the world, nearly four decades of development, the art of hospitality raised to its highest level... And at the heart of the curriculum that made the group’s world recognition: the professors, heralds of Vatel pedagogy.

Vatel professors around the world

Each year our Group School directors, getting together for the Vatel International Convention, use today’s experiences to continue to invent tomorrow’s schools for our future hospitality professionals.

Learning how to exceed the profession's expectations

Vatel cultivates the qualities required to be a good professional in the hospitality industry: being fluent in foreign languages, knowing how to work with other cultures... Hoteliers are attracted by Vatel students’ resumes, as Vateliens can tell us.

François Perraud feels both a hotelier and a financial controller, an expertise that he likes to pass on to Vatel students.

And if we could all create happiness...

Jeremie de Fombelle has always loved resorts and has seen many of them, before coming to Mauritius. And this is where he really fell in love! But economic competition is stiff. How can you stand out, if not by the quality of your management?

Vatel professors around the world

Every day, Vatel students and instructors prepare for class, study, and fan the flames of their curiosity, thanks to the cutting-edge digital library provided by the ScholarVox platform. Come right this way for digital access to knowledge!

An MBA specializing in ecotourism opens in Madagascar. This island has all it takes to materialize this demanding approach of responsible and innovative tourism.

New ideas, enthusiasm, the desire to embrace a gourmet universe: Jerome Ferrer’s story has all the ingredients that inspire the best “success stories” to strategy professors!

Tomorrow’s hospitality will be green and virtuous

The hospitality and tourism industries are particularly concerned by sustainable development. And what if Vatel alumni played a key part in this transition towards more environmentally friendly hotel management?

Read more
Success at the top

Cultivating the art of being a Vatelien

Besides having a Bachelor or an MBA Vatel, what does being a Vatelien mean?

Throughout their entire careers, Vatel alumni remain in touch with their schools. This is also true for Kevin Tessieux, who has never forgotten that he was also once a student, and who now shares this knowledge with students today.

Art and catering: a tasty association

Chahrazade Baroudi, a Vatelien since 2013, describes her job as Marketing and Communication Manager in IDAM, Alain Ducasse’s restaurant on the top floor of the Doha Museum of Islamic Art, in Qatar.

Future hospitality professionals, welcome to Vatel’s 100% management simulation serious game! For an entire week and on three continents, MBA students met the challenge of managing a 4-star hotel and a resort in the Indian Ocean. The winners are...

Read more
No one can beat a Vatel alumnus to coordinate the Vateliens network!

Who is Gaelle Garnier, the new manager of the network of 35,000 Vatel alumni throughout the world? Let’s meet a Vatelien who works with Vateliens!

Training in sustainable development: stakes for the future

The 25th Eurhodip conference, which Vatel took part in, took place in Croatia. Targeting responsible tourism, this conference allowed participants to have more information on opening higher education courses in the field of sustainable development.

Designed to address the needs of the global hospitality industry, the Marco Polo program strengthens the international profile Vatel students have and has just received the prestigious Best Innovation in an Educational Program Award.

International is the secret...

Graduated in 2011, Alexis Bouche began his career in England. Six years later, he returned to France and is now the Sales Manager of the 5-star hotel, Villa Maïa.

Nearly 40 years old, and now 50 campuses in 32 different countries: Vatel Group opened its first school in Paris and is continuing to grow and duplicate its innovative educational concept in schools abroad.

Trained at Vatel Nimes ten years ago, Chloe Wu has a brilliant career in China. She no longer works in the hospitality industry, but has not forgotten her passion of hospitality and service...

The Vatel International Research Center in Hotel and Tourism Managementhas just published the 10th edition of its Journal, which targets research and reflections on changes taking place in the hospitality and tourism industries.

Vateliens, ambassadors of the Vatel spirit

Curiosity, humility, team spirit... A Vatelien shares his commitment to values his school transmitted to him.

The same international spirit that students have Vatel and 4 students in nursing undertake a humanitarian project in Madagascar.

A traveler - salesman - ambassador, Marco Polo introduced Asia, at that time nearly unknown, to Europe. This inspirational fate has given its name to Vatel’s international exchange program, where students can study at another Vatel campus for a year.

The most senior representatives in the international hospitality industry give Vatel the Best School Hospitality Award. An entire profession thus acclaims them.

Learning the skills needed to be a manager, quick employability, international careers... Vatel, the passport that gets you hired. See the video.

Read more
Press Books
OUR MISSION - Preparing the younger generations for a successful career in International Hotel and Tourism Management
Find your course in 3 steps Request the brochure Send a message
Vatel serves cookies to analyse traffic to this site. Information about your use of our site is shared with Google for that purpose. Read moreOK